About Bait Hasson Entrepreneurship and Construction

Bait Hasson, is a part of the Parizat-Hasson Group and is engaged in urban renewal promotion and construction projects in Israel's Sharon and Central Regions, in building reinforcement projects (TAMA 38/1) and in demolition and reconstruction projects (TAMA 38/2). Bait Hasson has been working for many years to promote projects under the established reputation of the Parizat Hasson Group, which has been active in the construction field for 60 years. The Group holds "C-5" certification, the highest certification for residential construction contractors. The shareholders and managers of Bait Hasson are Shlomi Hasson, who has many years of experience in the construction industry and has twice won a national excellence award in for construction. Other shareholders include Lior Hasson and Nir Dorani.

Head of Marketing and Sales

Bait Hasson works with experienced professionals and employees, some of whom have been with the group for many years, and thus can ensure quality and meticulous construction while meeting deadlines.

Bait Hasson is part of the Parizat-Hasson Group, which offers its years of experience, a loyal customer base, and economic strength.

Bait Hasson has been active for several years in the promotion of urban renewal projects. To date, it has signed a considerable number of urban renewal construction contracts (over 100 new housing units) and is now holding advanced-stage negotiations for more agreements. Bait Hasson’s first TAMA project, which included two buildings on 4 Moledet Street in Hod Ha’Sharon, ended with remarkable success for the owners of the existing apartments.

In 2018, Beit Hasson completed two buildings at 1-3 Hovat Ha’Levavot Street in Herzliya. The Company is now near completion of 2 buildings at 9-11 Ha’Oranim in Hod Ha’Sharon and the 45-51 Ha’Hagana project in Herzliya and is about to begin construction of two projects in Hod Hasharon –
3 Ha’Tikhya Street and 8 Bereshit Street.

The Parizat Hasson Group of construction companies has been synonymous with luxury and excellence for the past 50 years among residents of the Sharon, Dan, and Tel Aviv Regions. The group has championed the vision of transforming every project it builds into a unique masterpiece and was a partner in transforming Hod Ha’Sharon from a small town into a green and charming city in Israel.

Over the past decade, Edna and Shlomi Hasson have helped the Company in winning prizes for two projects in the National Prize, awarded by the Israel Builders Association.

In 2004, the company won a prize for its “Four Seasons for the Park” project, which is a uniquely graded area, planned with an Italian romantic inspiration, with arches overlooking the “4 Seasons” park in the western part of the city.

In 2008 the Company won a prize for its “Shvil Ha’tapuzim” project in Magdiel, thanks to a new expression of residential culture in Israel. This was accomplished by a complex of 42 terraced housing units built around a beautiful inner courtyard, that created an independent living environment for its residents.

Parizat Hasson has built many projects throughout Hod Ha’Sharon, where the company’s planning vision is a green and rural environment, combined with urban elements, affording the residents the best of both worlds. Throughout its years of operation, Parizat-Hasson has built thousands of housing units in the center of the country and in the Sharon Region, maintaining its leadership and meticulous construction, through the use of the finest materials and the most up-to-date building techniques. The company is one of the first companies in the industry to hold the ISO 9001/2000 Standard, with its planning and construction stages and projects being monitored regularly by the Israel Standards Institute.

In recent years, Parizat-Hasson has been active in TAMA 38 projects through its Bait Hasson Entrepreneurship and Construction subsidiary. When working on its TAMA 38 projects, Parizat-Hasson maintains its principles, to act professionally, with maximum cooperation with the residents, and all to create a quality and advanced product. Bait Hasson is now in the final stage of finishing work on two buildings under the TAMA 38 concept of reinforcement and reconstruction on Oranim Street in Hod Ha’Sharon and another building with four entrances on Ha’Hagana Street in Herzliya.

Bait Hasson is also planning / issuing building permits for several projects under the TAMA 38 concept (both reinforcement and reconstruction, as well as demolition and reconstruction) and is in the advanced stages of negotiations regarding additional projects in Hod Ha’Sharon, Ra’anana, Herzliya, Ramat Ha’Sharon, Kfar Saba, Petah Tikva, Ramat Gan and Kiryat Ono.

Bait Hasson is now Developing and Marketing the following Projects:

The Following Projects Are Being Planned: 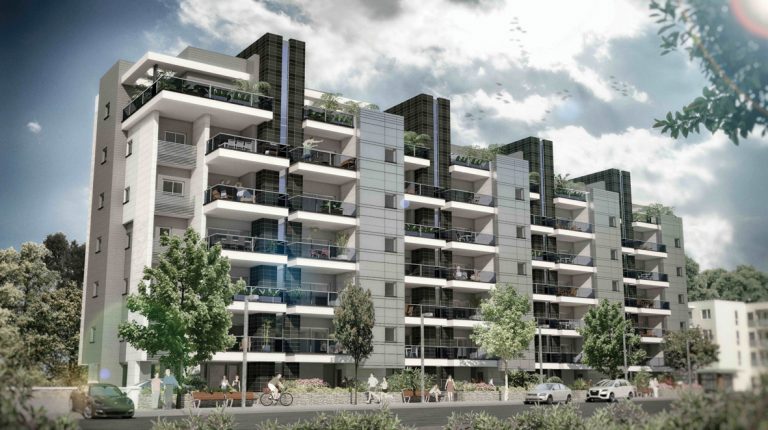